The Financial Demise of Blockbuster

Blockbuster, yet another retailer to meet its fate in Chapter 11, is an important example of what can happen to companies that employ the strategy of “disrupt, then defend”. At Bridgesphere, we believe that it is all-to-easy to play “Monday Morning Quarterback”. We do, however, believe it is useful to view Blockbuster’s tribulations through our framework, identify the key strategic / financial issue that essentially predetermined its demise, and most importantly consider: who could be next.

Within our framework, we analyze Blockbuster through two equally important lenses: Strategic Financial Analysis & Business Strategy. In doing so, we reveal two critical issues that essentially predetermined Blockbuster’s fate long before the rise of Netflix & Redbox:

Blockbuster was never a leading-edge retailer. Sure, the company built a tremendous brand that garnered the loyalty of millions of consumers; however, from a return on invested capital perspective, the company was hardly what we would consider a financial role model. When we “peal back the layers” of our Value Creation Framework, we can ultimately breakdown a company’s economic profit into a combination of margins & asset turns (sales / assets). Specifically, for retailers, we start by examining a company’s adjusted operating margins (essentially, EBITDA + rent, adjusted for non-recurring charges). 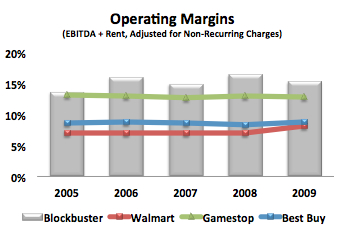 From an margins perspective, Blockbuster used to be a standout. Blockbuster’s median margin in the early 2000’s hovered in the neighborhood of 20%. As the company’s one-disruptive concept began to suffer from increasing competition from non-traditional competitors such as Netflix & Redbox, margins deteriorated to levels closer to those earned by other bricks & mortar competitors such as GameStop & Best Buy. While these lower margins were still relatively healthy as compared to relevant competitors, they simply weren’t high enough to overcome Blockbuster’s glaring financial weakness: unproductive stores. 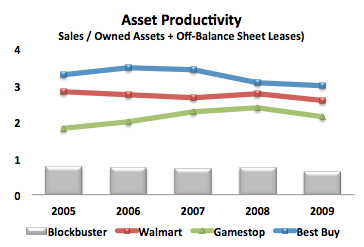 Our Value Creation Framework capitalizes off-balance sheet leases (removing the accounting maneuver employed by many retailers to remove leased assets and debt off the balance sheet). Such an adjustment allows us to compare the productivity of long-term assets, irrespective of whether the accountants deem them owned or leased. For our purposes, both owned and leased assets are operated, and should be viewed through the same lens.

Examining the asset productivity of its peer-group, it is glaringly obvious that Blockbuster’s stores were far-less productive than its peers. Even during the early 2000’s (when Blockbuster was far healthier), this metric substantially lagged industry leaders.

When game-changing competitors entered Blockbuster’s market, the Company was essentially a financial sitting duck. Asset turns would collapse as the top-line declined, crushing returns & ultimately driving the company into the throws of bankruptcy.

Insights such as these are critical to identifying long term winners (and losers) in any industry. In the case of Blockbuster, unhealthy asset turns were a financial warning sign long-before Netflix & Redbox became legitimate threats. From a financial standpoint, Blockbuster wasn’t playing with a full deck. It mastered the P&L (achieving very high margins) but utterly failed at managing the balance sheet (especially after adjusting for off-balance sheet leases). This financial weakness essentially “set the table” for the competition, which we examine through the lens of business strategy.

From a strategic standpoint, Blockbuster suffered from the common failure to achieve Continuous Disruptive Innovation. Undoubtedly, Blockbuster was the best video rental retailer (concepts such as Movie Gallery / Hollywood Video struggled to earn their cost of capital). But the company failed to continue to innovate its once disruptive offering. Simply put, it was “married to retail”.

Blockbuster saw the Netflix threat, but its online strategy was never developed into a viable competitor. Branded kiosks were also an option, but never materialized (for a variety of reasons) into a legitimate competitor to Redbox. In short, Blockbuster never implemented “the next big thing”. It may have made several meager attempts, but the Company never came to terms with the fact that retail became too capital-intensive.

And as a retailer: Blockbuster never could wring enough cash flow from its assets. Various options existed.  None were successfully executed.

Blockbuster could never effectively innovate beyond its original concept. The game was changing & Blockbuster (a former game-changer) was stuck in the past.

Who could be next?

Concepts such as Barnes & Noble and Borders are perhaps the most likely near-term retail candidates. Both companies have destroyed a tremendous amount of value over the past several years and are a good example of why the strategy of “disrupt, then defend” is not conducive to long term value creation.

Strategies exist that can help them weather the storm of the Kindle and iPad (and no, selling the Nook isn’t the answer). While certain strategic alternatives are less elegant than others, the game has changed, and both companies appear to be too-closely hitched to their traditional business models. 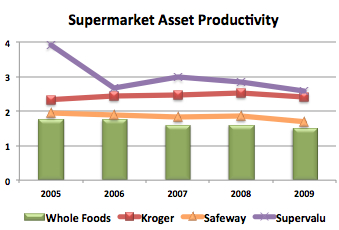 Long-term, we are concerned about Whole Foods Markets. While the Company has successfully navigated the competitive waters, buying a chief rival, and successfully defending its disruptive offering against traditional supermarket chains, we remain concerned about the Company’s relatively low asset efficiency (scarily similar to how Blockbuster appeared ten years ago). There are a variety of steps management can take to improve upon this weakness, even boost the company’s top line & simultaneously enhance the Company’s strategic / competitive position.

Whole Foods is currently a phenomenal competitor.  But we remind our readers that Blockbuster (in its era) was too. Systemic weaknesses in a Company’s strategic financial profile can ultimately drive tremendous value destruction when the competitive landscape changes, rendering traditional business models either financially or strategically obsolete.