We believe that well-executed acquisitions can be tremendously value creative.  However, successful transactions are typically the exception, not the rule.

Why M&A can be a good idea

If a firm cannot organically grow its business into high ROI ventures, they should consider buying a company who can. While the old adage makes sense, “if you can’t build it, buy it”, we believe this strategy is overly simplistic in the world of corporate strategy and M&A. Acquisitions, to us, have two primary attributes:

Get either of these wrong, and even the most brilliantly conceived corporate marriage is ripe for disaster and unlikely to deliver value to stakeholders. 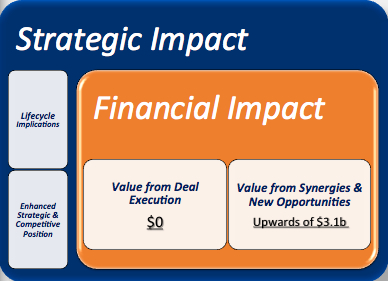 We think of M&A as just one strategic option available to corporate managers, and a risky one at that. Primary benefits include significant short-term growth and an enhanced competitive position within an industry. Primary pitfalls include overpaying for the target and difficulties achieving desired synergies & strategic goals.

In order to execute a deal in which the benefits outweigh the pitfalls, we apply our Strategic M&A Matrix. Our framework divides an acquisition into two segments:

Every transaction  needs to have a positive strategic impact on the acquiring firm. At Bridgesphere, we analyze potential deals through our Value Creation Framework focusing on two primary attributes: a deal’s lifecycle implications, and whether a transaction is likely to enhance a firm’s competitive position within a given industry.

1. What is the economic track record of the target (as measured by ROIC) and where does the target lie on the corporate lifecycle?

2. How does the combined firm’s position on the corporate lifecycle compare to the acquirer’s pre-acquisition?

While not all transactions will have a meaningfully beneficial impact on a firm’s lifecycle attributes, we believe that many truly game changing deals improve a company’s competitive position along the corporate lifecycle. Consequently, the lifecycle implications of a proposed transaction should always be considered in conjunction with a deal’s strategic and competitive ramifications.

The second step in considering the strategic impact of any proposed deal is to analyze the strategic and competitive implications of the transaction. Here, we seek to answer:

1. What is the target’s competitive position within its industry

2. How does the combined firm’s competitive position compare to the acquiring firm on a stand-alone basis?

Both of these questions can be thoroughly addressed in a robust and systematic fashion via Bridgesphere’s Value Creation Framework. Our proprietary return on invested capital metric, the analysis of relevant value drivers, and our lifecycle framework empower management teams and investors to determine whether a proposed transaction will have a positive strategic impact on the acquiring firm.

We divide a transaction’s financial impact into two distinct components:

Deal Execution: A transaction can have a positive financial impact for the acquirer (and its stakeholders) if a target is acquired at a price less than the value of its discounted future cash flows. Much like an institutional investor can drive value through the purchase of a stock whose current price implies an overly pessimistic scenario for a firm’s future earnings & cash flows (such as any Apple investor circa 2005), a corporate manager can create value by purchasing targets whose value isn’t fully reflected in the public or private marketplace (think: good serial acquirers such as Warren Buffett’s Berkshire Hathaway).

Synergies & New Opportunities: While deal execution doesn’t necessary have to be a source of value in a transaction, we believe that a proposed transaction must, in its entirety, have a positive financial impact on the combined firm for a deal to create value for stakeholders. Whether this value is derived from deal execution or the achievement of synergies & new opportunities is irrelevant. Even if a deal is executed at a significant premium to a target’s stand-alone discounted cash flows, a deal can still have a positive financial impact if the value derived from synergies & new opportunities (as measured by discounting the future cash flows of the combined entity) outweigh the premium.

However, it must be stressed that in order to be value creating for stakeholders, a proposed deal (in some sort of combination between value derived from deal execution and synergies) must have a positive financial impact on the combined firm. Any value-creating deal must make sense: strategically & financially.

The Ocean Effect: Why M&A is typically unsuccessful

An M&A transaction is like a vast ocean — an ocean full of potential purchase prices, strategic opportunities, political issues, cultural concerns, and ego. Management teams often become overwhelmed (whether they know it, or not).  We think this concept is playfully depicted in a recent Family Circus cartoon:

Much as children lose their perspective of the beach while playing in the ocean, management teams often lose touch with the economic realities of a proposed transaction when a deal’s strategic benefits are enticing, and a surface-level analysis of the synergies & new opportunities is compelling.

Whether manifested though large deal premiums or multiple competing bidders, Ocean Effect can have disastrous ramifications for stakeholders. At its core, Ocean Effect is more than a simple lack of financial discipline. Ocean Effect starts with a loss of perspective. Sometimes “great M&A ideas” should remain, “just ideas” when they cannot be achieved in a financially prudent fashion.

We look back on many of the major transactions in Pharma and Telco during the 1990’s and early 2000’s. Many of those deals failed to create value (as measured by relative stock market performance). These transactions rarely materialized into shareholder wealth.

A recent Bloomberg study drives this home. Of the 100 largest transactions between 2005 and 2008, 53 cases resulted in relative underperformance versus industry benchmarks in the two years subsequent to the deal.

We believe that M&A can drive value. However, successful deals must have BOTH a positive strategic impact & favorable financial impact. Don’t fall victim to Ocean Effect; keep your head above water when considering the strategic & financial ramifications of potential transactions.