Within the internet world

Both Google and Yahoo were certainly disruptive, forever changing the manner in which consumers (as well as businesses) interact with the internet. While both companies developed disruptive technologies & services, only Google has achieved what we would consider Continuous Disruptive Innovation. Its ability to dominate search, and then leverage its platform into a portfolio of disruptive technologies & services has created tremendous value for shareholders, not to mention a long-term stream of impressive earnings and cash flows.

At Bridgesphere, we believe that companies that employ the strategy of Continuous Disruptive Innovation have certain financial & strategic attributes that ultimately drive value creation. From a high level, these firms:

All of these value-creating attributes are either directly or indirectly observable through our Value Creation Framework. 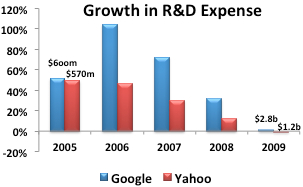 Many within the Technology and Financial world know all-too-well that Google has significantly outspent Yahoo in aggregate R&D expenditures over the better-part of each company’s respective history. When comparing each company over the previous five years, we note that both companies invested in research & development at roughly the same level up until 2005. That is when Google significantly increased its R&D investment relative to Yahoo. By 2009, Google’s annual R&D spend was over double that of its chief competitor. Google clearly passes the first test: they are committed to R&D.  Their investment has far-surpassed their primary competitor.

Does R&D Create Value for Google?

That is where our second test comes into play — an analysis of a firm’s R&D productivity. Since Bridgesphere capitalizes R&D expenses onto a firm’s balance sheet, one measure of R&D productivity can be captured though an asset turn metric (sales / capitalized R&D expenses). Just like any other strategic asset class: buildings, property, working capital, etc, the higher the asset turns, the more productive the asset. 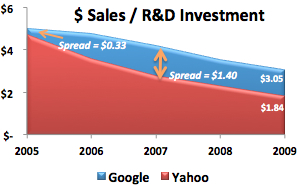 In the case of Google & Yahoo, the results are striking. Not only has Google consistently invested more cash into R&D endeavors, but the fruits of those investments (as measured by revenues in this case), are much higher. Google not only spends more, but it generates far more revenue per dollar of R&D investment than its primary competitor. This disparity translates into a superior stream of earnings & cash flows. Investors have more than taken notice. Over the previous five years, shares of Google have considerably outperformed those of Yahoo.

Google has invested more in R&D than Yahoo. On top of that, Google has consistently generated more revenues (as well as earnings and cash flows) from each dollar invested in R&D. This isn’t simply a trend that has swung like a pendulum from quarter-to-quarter. This is a long term trend that has driven a period of sustained value creation through the strategy of continuous disruption.

Google’s Platform: A key to success

Our third attribute of Continuous Disruptive Innovation is perhaps the most obvious in the case of Google. Here, Google has unquestionably become the dominate name in search. It dominates search and has exploited that dominance to create value through endeavors in advertising, productivity tools & enterprise products (to name a few). Recently, the Company added Google Voice to its Gmail service (something we consider a strategic network of users), thereby creating a legitimate competitor to VOIP offerings such as Skype & Vonage.

The development of Android allowed Google to further penetrate the smartphone market in a meaningful & value creating way. In short, Google didn’t just quit once it dominated search. It continuously innovated its offering, often leveraging its loyal network of users to reach new markets, thereby growing earnings and cash flows.

Our final attribute for Continuous Disruptive Innovation focuses on the flexibility of management. Here, it is almost indisputable that Google has continuously thought “outside the box”, entering new markets and adapting its services as the competitive marketplace evolves. Google has been one step ahead of almost everybody (including non-traditional competitors). That forward thinking has not only driven superior stock performance as compared to Yahoo, but superior value creation as compared to most technology powerhouses.

Yahoo is a good example of the “other side of the coin”. Most recently, the Company has struggled to retain executive-level talent in numerous areas of its business. Such turnover can easily impair a company’s ability to achieve sustained value creation for stakeholders. Remember: Google’s superior financial and stock performance wasn’t built in a single quarter. Rather, Google created value in large part as a result of an outsized investment in research and development (over many years). This value creation was compounded by the fact that Google earned substantially more revenues, earnings & cash flows on its outsized investment. The company’s flexible & innovative management team continued to “raise the bar”, using Google as a platform to offer a portfolio of value-creating (and often disruptive) services. Continuous Disruptive Innovation allowed Google to compete in areas beyond search and eventually enter new markets.

While we often admire companies who have developed disruptive products and services, we acknowledge that not all of these companies are, themselves, disruptive. Companies that operate disruptive businesses are not created equal. Those who adopt the strategy of “disrupt, then defend” may create value for a period of time, but ultimately are overcome by competitors who: