Contagion: 3 Shocks That Will Crush Small Business Performance in 2016

They happen. In fact, they usually happen when we least expect it. More importantly, they materialize in the blink of an eye, leaving trillions of dollars in economic damage in their wake.

Years later, we look back and say “We totally should have seen that coming” and wonder why we would ever dare to think “this time is different“.

We’re back in bubble territory.

This time is not different.

Consistent with the tech bubble and the mortgage / financial crisis, this one has a unique cause — and like its predecessors, will most certainly yield significant economic damage. Stocks will fall, venture-backed companies will run out of cash, people and businesses will spend less money.

A few weeks ago, we previewed our case for an impending economic slowdown here.

Since that time, we have received a lot of feedback from clients and readers of my blog asking, “what exactly is happening?” So here is our case for an economic slowdown in 2016. Let me rephrase that:

Here is our case for an economic crisis in 2016.

We believe small business owners are going to face a severe and sudden slowdown in demand driven by economic chaos similar to that which occurred in 2008.

Back then, few people had any idea how many jobs, how many businesses, and how many “ways of life” were tied to the real estate market. Everybody from mortgage bankers, to investment bankers, to dry cleaners, to baristas felt the pain.

Turn the page to 2016, business owners will be shocked when they discover their fortunes have been unknowingly tied to:

These three economic quotients are inter-related. But that is beyond the scope of this article.

All that matters is that we are about to undergo a painful unwinding of a period in time when interest rates were too low (for too long), the US dollar was too weak, and the value of all assets (oil included) were artificially propped-up like a poorly built house of cards driven by absurdly cheap capital.

Put a different way, this recent period of low interest rates has made everything expensive. Stocks are expensive. Bonds are expensive. Money has drifted into increasingly speculative startup ideas that have specious business models (at best).

Art is expensive, collectibles are priced near all-time highs, people are buying $5 pour-over drip coffee at an unsustainable level.

It may be one thing for people to pay $7 for a cup of coffee in real estate markets like San Francisco or New York, but people from Chico, to Cleveland, to Charlotte are paying over $5 for a cup of drip coffee.

You can laugh all you want. I’m a coffee snob just as much as the next guy, but $5 drip coffee is a classic example of conspicuous consumption of the variety that signaled the economic implosion of 2008.

Conspicuous Consumption: The term refers to consumers who buy expensive items to display wealth and income rather than to cover the real needs of the consumer. —  Norwegian-American economist Thorstein Veblin & conspicuousconsumption.org

An economic crisis in 2016 would impact your business.

A portion of every business’s top line is exposed to spending that is simply going to evaporate into the night. How much of your business’s revenues are tied to jobs, incomes, and spending patterns that will no longer be sustainable?

Alternatively, how much of your revenue today didn’t exist in 2008? That’s the kind of question that keeps business owners awake at night.

The writing is on the wall.

There are three developments we see as signaling the potential onset of economic pain:

Over the last few months, as we started talking about interest rates, oil and China; stocks have sold-off and experienced significant volatility. I think this is only the beginning. I see it getting a whole lot worse.

Despite the marked pull-back in stocks, investors are finally coming to the realization that stocks are still expensive. In fact, stocks are really expensive.

As this realization takes-hold, stocks could fall (a lot), taking down a host of other asset classes with it. Despite the recent sell-off, stocks remain at levels eclipsed only during 1929, the tech bubble, and the year leading up to the financial crisis. 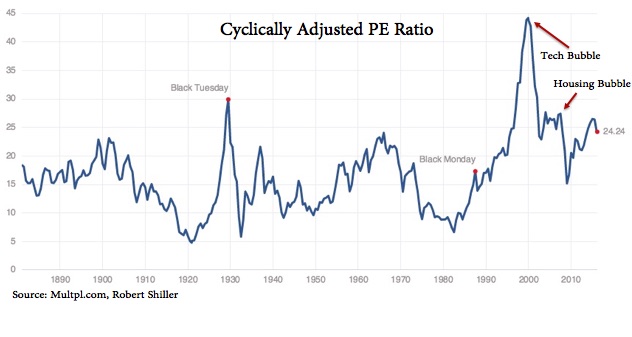 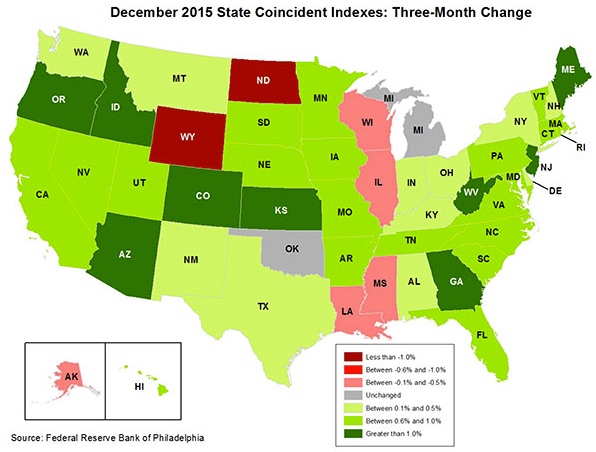 The canary in the coal mine.

On a walk to lunch on a sub-zero afternoon in Chicago back in 2007, I had a discussion with an analyst that covered banks. At the time, I worked for a bank, so I was profoundly curious why big multi-national banks were trading at what appeared to be “cheap” valuations. They were getting cheaper than the overall stock market.

The analyst explained to me that I had touched upon a proverbial “$64,000 question“. Balance sheets appeared solid, earnings were ok, yet investors were starting to value these companies as if their fat profits were about to vanish into the night.

At the time, there weren’t too many rationales that could explain how global banking revenues would suddenly turn into jaw-dropping losses. Looking back, that’s exactly what happened. Those stocks were becoming “cheap” because investors started heading for the exits before it became overwhelmingly obvious that global economic growth was fueled by a slew of bad mortgages (and the securitization thereof).

I think a similar narrative is playing-out today. Bank stocks are sending us signals similar to those that were observed immediately preceding the economic chaos of 2008.

Just like then — there are a thousand excuses as to why.

My contention is simply this: Bank stocks are the proverbial canary in the coal mine. I think the recent selloff in stocks is going to get a whole lot worse. Businesses (large and small alike) are going to get caught-up in the contagion of economic chaos.

If any portion of your business’ revenues are fueled by consumer or business spending that is in anyway connected to the financial markets, the energy sector, real estate, or venture-backed startups — your revenues are at risk.

Is your business able to sustain a decline in sales on the magnitude of 10% – 30%, or more? What’s the first move you are going to make if your revenues turn South?

Enjoy the best, prepare for the worst.

That’s what business intelligence helps our clients achieve. While our current economic thesis is pretty dire, sometimes that’s what business is all about. Great companies excel during good times and do what it takes to survive (and even thrive) when the economy hits a rough patch.

That’s why we offer Business Performance Planning – a simple system that empowers our clients to:

I invite you to learn more about Business Performance Planning. You can also click here to schedule a free consultation.

– Wishing you much success, regardless of what the economy has in store for us during 2016!